Consistent fragmentation in blasted rock can be difficult to achieve in large blast areas.   Changes in rock quality, charge placement and burden and blast geometry can all cause variation in fragmentation results and oversize material within the blast can happen.   Oversize material impacts load and haul efficiency and can require rebreak equipment to be deployed, all of which cause delays and increased mining costs.

This is particularly evident in large strip mines such as this large Queensland coal operation.  Overburden blasting in the pit requires careful management of hole depth and charge placement to avoid dilution, but blast designs still need to ensure adequate energy is delivered to effect suitable fragmentation for digging and hauling.

This mine required a solution that could both quantify the fragmentation performance, particularly with regards to oversize identification, as well as create a spatially accurate representation allowing correlation with the pattern and charge designs showing where blast design features may not have been adequate to effect good fragmentation.

This would support understanding and improvement of blast designs in similar situations in future for better fragmentation and would create a historical audit trail of blast performance that could be viewed, quantified and tracked.

FRAGx was chosen as it was able to achieve this in open cut environments using existing common measurement techniques and in a simple and fast way.

The mine used drones for point cloud capture and was routinely measuring post blast surfaces for various purposes.  FRAGx can use that same data meaning there was no additional access or work required to get the required fragmentation results.

FRAGx can be operated as a plugin within the mines existing point cloud editing and analysis software and the results can be combined with blast designs in Blastlogic to allow correlation, visualisation and analysis of the effects of blast design and execution decisions on fragmentation performance. 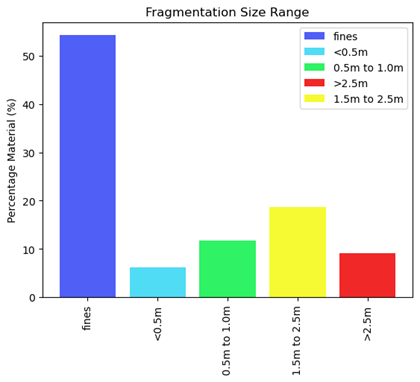 The mine was able to provide PETRA with details about the tolerances of oversize material that were considered safe and viable for load and haul, as well as a number of sample data sets that were representative of the typical data being collected.

This was evaluated by PETRA and was suitable for use with FRAGx as it was, so there was no need to change the operating procedures for post blast drone pickups.  PETRA used this sample data to train machine learning models to identify material that was out of size tolerance and could be run within FRAGx.

This work took about two weeks and at the completion of that the solution was ready to be delivered to the customer within the FRAGx plugin. This enables the users to press one button to analyse a data set and produce both a spatial map of fragmentation and a report showing % oversize and some other detail about size distribution within the pile.

The spatial map showing fragmentation can be imported to the sites blast management software and viewed together with the blast design to identify the possible causes and design features relevant to the oversize material, enabling improvement and learning for future blast operations.

The immediate results of this implementation were that the customer was able to see effects the blast design features may have had on fragmentation and start to develop a better understanding of the combination of rock types, structure, blast design and oversize results.

Within several weeks, the mine was able to adjust some blast design practises where particular shapes or features such as faults were present to noticeable reduce oversize occurrence, and achieved a corresponding reduction in rebreak requirements and load and haul problems due to oversize, including less damage to equipment due to oversize rocks being loaded.