The use of digital twins in process plant optimisation is gradually becoming more widespread, but this is not the only area in which they offer benefits.

As mines become better connected and their data more integrated, digital twins can be used to simulate and improve every stage of an operation, from drilling and blasting, to digging and then on to the crushers and concentrator.

According to Wikipedia, digital twins integrate the internet of things, artificial intelligence, machine learning and analytics software with space networks to create live models of digital simulations that update and change as their physical equivalents change.

In practice, this means that a complex computer programme is fed data, both current and historic, to create a 3-D model featuring certain elements of the mine value chain. Mathematical algorithms are then applied in order to simulate and predict the performance of individual processes in response to changes in upstream and downstream variables.

“There are different parts of digital twins, including those that relate to storing the data and making it available, but our product, MAXTA and its subset of applications can generate a digital twin model which is based on machine learning.”

“There are other kinds of digital twin models too; there are digital twins where the underlying engineering model is physics based and there are even empirical models, but MAXTA‘s applications are 100% machine learning-based. Some of that is supervised and some is unsupervised.”

MAXTA is the world’s first digital twin portal for optimisation and gives access to a suite of mine-to-mill and pit-to-port applications along the entire value chain. By integrating 3-D geological data, with data from blasting, fragmentation and fleet operations, the applications within MAXTA can accurately predict concentrator performance in response to changing conditions.

This allows not only for set points to be adjusted and maintenance intervals to be planned effectively but, by working backwards from optimal plant performance, every area of the value chain for which data is available can be tweaked and enhanced.

Drill and blast engineers can quickly run multiple simulations to evaluate the effect of different drill and blast designs upon dig rate and crusher throughput.

The full MAXTA application suite is platform agnostic and features interoperability with third-party applications from vendors such as Resolution Systems, Mine Excellence and Maptek.

“The benefit of interoperability is from the user point of view; it fits into their current workflow and minimises the amount of change management required,” says Stewart. “It makes a huge difference in time-to-value”

In drill and blasting, MAXTADrill&Blast uses plant performance data in different geologies to learn the best blast design for each domain.

“The simulation output allows the drill and blast engineer to see the value their designs create by effectively gamifying the trade-off between productivity and cost. This empowers the engineer to receive immediate feedback into the value of their design,” says Stewart.

“We start with downstream process performance and build a model with any data related to those processes. It should be thought of as the downstream processes that have potentially latent value; the model can be used to predict and model that value driver.” 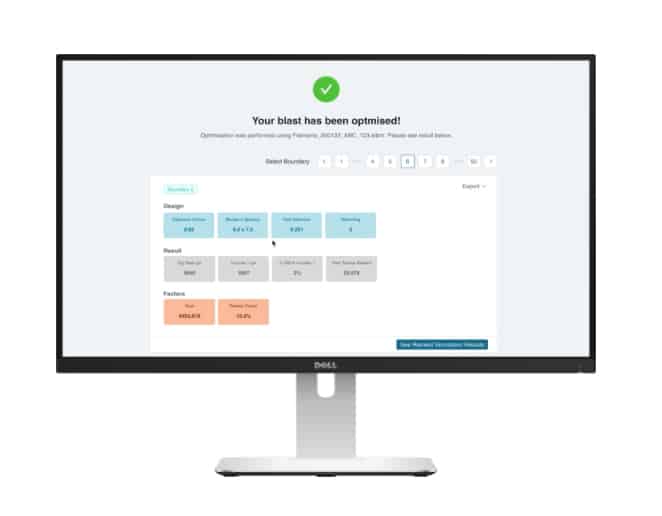 On August 20, 2019, Stewart presented at the Maptek user conference in Santiago, Chile. She described how PETRA helped a major iron-ore miner to simulate the effect of drill and blast design levers upon the performance of two crushers and also on the dig rate of a hydraulic excavator at one of its mines in Western Australia.

The aim of the project was to optimise the mine’s drill and blast design (load, average distance, type of explosive, density etc.) according to different ore characteristics defined in its Vulcan block model.

PETRA proposed developing a digital twin model for drill and blast simulation using four years of data, within the application suite this is called MAXTADrill&Blast. By tracking ore from the block model to the blend fingers and then using the daily/shift crusher feed schedule, PETRA was able to create a model of the full value chain from the block model to the coarse ore stockpile.

Crusher throughput and dig rate digital twin simulations were based on the development of three models:

As for every client, PETRA provides the models via the MAXTA portal, a highly secure two-factor authentication web application login.

The models enabled the mining company to simultaneously simulate the effect of drill and blast designs on crusher throughput and instantaneous dig rate. The designs were directly optimised for each domain, as well as the dig rate and downstream processes without the need to measure fragmentation.

“In addition to running the simulations, we also ran MAXTADrill&Blast mathematical optimisation algorithms over the digital twin models to optimise the burden and spacing, stemming and explosive density and product for different blasting domains,” Stewart explains.

“This is the same process that we use for set point optimisation in the processing plant to maximise recovery.”

The MAXTADrill&Blast (digital twin) user interface displays the drill and blast design levers with the greatest effect on crusher throughput and dig rate, as well as a new page to enable individual blasts designs to be simulated.

An additional feature enables blast design to be optimised for each domain with a blast polygon. The domains are determined using unsupervised machine learning and form the basis for optimised differential blasting. Each domain is individually and simultaneously optimised according to the rock type to inform the optimal performance of downstream processes such as crushing or milling.

“The domaining part is really important,” explains Stewart. “Because rather than blasting the whole shot the same way, you can identify different zones within the blast and optimise the design to create a better result.”

The models are not biased by the relative proportion of each geological domain, so don’t need retraining unless a new geological domain is encountered, or the crusher operation is changed significantly.

“We find most mines retrain about once a year, but in practice, any significant change in geological domain will become self-evident when monthly predicted values deviate significantly from predicted,” Stewart adds.

It is important to note that MAXTADrill&Blast provides a data-driven simulation based upon on mining data for the drill and blast phase; the simulation enables engineers to see which blast designs provided the best crusher performance for the full range of ore variability encountered in the past.

If the ore is tracked to the plant on a continuous basis in real time, then that can also be ingested into MAXTADrill&Blast to enable continuous learning and automatic retraining for plant optimisation.

“This would require a real-time, production version of the algorithms we use to track the historical ore – MAXTA Tracker algorithms,” says Stewart.

PETRA is currently working to create a fully live, twinned model of the entire mine value chain for another customer which will include automatic retraining for drill and blast optimisation.

“This will enable the mine to retrain the digital twin whenever they want. Each retrain will allow them to include model results for recent blast designs,” explains Stewart.

“Because none of our customers have had all their data integrated up to this point, we haven’t yet created a fully live, twinned model of a mine; most have live linkages at various points.”

“They’re probably going to be the first mining company in the world to have a fully live digital twin of their entire mine value chain.”

PETRA is currently undertaking drill and blast optimisation programmes at three sites in Western Australia and is working with partner company, Maptek, to bring MAXTA to some of the world’s biggest open-pit mines in Chile. Dr Stewart will be presenting at the Enaex conference in Antofagasta in mid-October and will also be available for meetings.

MAXTA is available now for demonstration, please contact us to arrange a walk through.